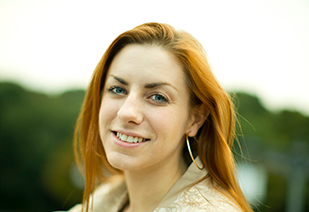 Experience
Hannah has been a full time narrator, actress, and singer in Tokyo since 2012. She is most famous for her role as Scott Sensei in the 2014 NHK Asadorama “Hanako to Anne”. She can currently be heard as the Japanese and English voices of Akami and Shrimp’s mother in Pre-Kiso Eigo “Sushi Town”. She has co-hosted three NHK Educational Radio shows including the currently running Koukousei kara Hajimeru “Gendai Eigo” program and she regularly works as both a voice actress and narrator for NHK World documentary programs. Furthermore, she has voiced a wide variety of corporate videos for acclaimed global brands. Her warm tone and flexible vocal range has landed her a wide range of voice acting and narration jobs, from children’s programs, to fighting video games, serious documentaries, and corporate promotions.